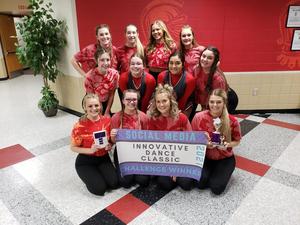 Last weekend, the competition announced the awards through a virtual ceremony. Based on the judges’ scores, all of the team performances received a Division II rating. Soloists, Raegan Raschke and Zoe Zabel, and the duet with Raegan Raschke and Journei Bales earned a Division II rating as well. Their team hip hop performance also earned an Overall Entertainment Award!!

Finally, thanks to the support of family, friends, and Wellington fans... the team won the Innovative Social Media Award for the second year in a row!!! This win meant a lot to the team this year because it also meant a donation to the Wellington Humane Society!!