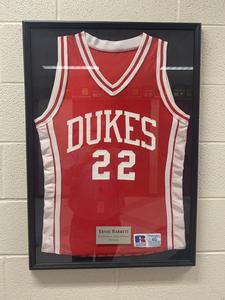 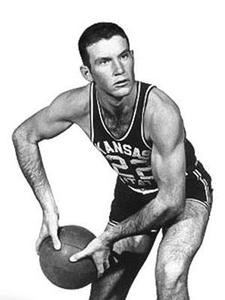 Ernie Barrett - Wellington Crusader, KSU Wildcat, and Boston Celtic remembers his high school alma mater. Ernie and his teammates were the last WHS Basketball Team to win a State Championship. His basketball career wasn't over - read on!
There's a new display on the wall at Wellington High School. Ernie Barrett, who helped WHS win a State Championship in Basketball in 1947, has donated his high school jersey back to WHS!

Ernie went on to play collegiately at Kansas State University (All-American), and then professionally with the Boston Celtics.

Here is what Ernie had to say about his days as a Wellington Crusader...(Courtesy of CelticsLife)

"We won the state championship in 1947 which is still the last time a team from Wellington has won in basketball. That '47 Wellington squad had plenty of talent, fine players like Harold Rogers who went on to play for Coach Henry Iba at Oklahoma State. Our coach was John Floyd and I credit him with all my success as a basketball player. He was the person who taught me the fundamentals, and the one who really helped me to improve my shooting. I was a 6'1 center in high school-- that should tell you about the height we had on that team--and I went on to play guard at Kansas Sate. I probably wouldn't have made it as a college player if Coach Floyd hadn't worked with me on my outside shooting."

At Kansas State, Barrett helped lead the Wildcats to the Final Four where they lost to Kentucky in a hard fought game. Barrett injured his shoulder in the semi-finals vs Oklahoma A&M and his injury heavily impacted the Wildcats, in that title game loss. He was taken with the 7th overall pick in the 1951 draft for rookie coach Red Auerbach. He wouldn't begin with the Celtics until two years later, to fulfill a two-year military obligation. Barrett played for the Celtics during the 1953-54 and 1955-56 seasons, in a total of 131 games.

Ernie is a 2014 Inductee at WHS on the Crusader Wall of Recognition. Click and read his story.
Ernie Barrett / Wellington Crusader / KSU Wildcat / Boston Celtic Thank you for the jersey and the memories - we are honored #22!